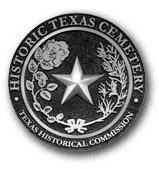 The Princeton Cemetery is located on the Hardin Wright survey of a league and labor of land granted by the Republic of Texas in 1844 when Collin County was still part of Fannin County.1 It is midway between McKinney and Farmersville in east central Collin County and is a third of a mile north of US 380 on Yorkshire Drive. Early settlers came to the area from the Upper and Deep South to farm the fertile soil of the Blackland Prairie. Established in a rural community, Princeton Cemetery now serves the rapidly growing City of Princeton and the surrounding area. It is the primary cemetery to the north and south in this region of the county. As the town has grown, the cemetery has grown through a long series of property transactions over 100 years. The histories of both the town and the cemetery are inextricably interwoven.

Settlement of the rural community began in 1881 when the Missouri, Kansas & Texas Railway Company (the Katy), which was a part of Jay Gould's Missouri Pacific southwestern system, purchased the bankrupt East Line and Red River Railroad and announced plans to extend the line from Greenville to McKinney.2 Completed in 1882, it operated as a branch line of the Katy system, and later of two other railroads; however, it continued to be known locally as the East Line.3

First called Wilson's Switch, the town that developed around the railroad water-refilling stop was officially named Princeton in 1888 in honor of a promoter of the townsite, because there was already a Wilson, Texas.4 Princeton quickly became a retail and commercial center for area farmers and was the major shipping center for bois d'arc logs used for fence posts around the world.5 In 1891, the Princeton Cemetery was established with the railroad as its eastern boundary. The town's first school building, erected in 1898, was on property that years later would become the northern part of the cemetery.6

In the late 1870s, T. B. Wilson and his brother George A. Wilson began farming near the site of the future City of Princeton. Between 1890 and 1894, at least three burials were made on George Wilson's property. Just a few weeks before his death in 1895, George Wilson sold the newly formed Princeton Cemetery Association three acres, which included the three grave sites, for $20 an acre.7 S.H. Houseman, W.A. Harrelson, and Almarine (Alma) Wilson, who was George Wilson's son, served as the first trustees of the cemetery association. 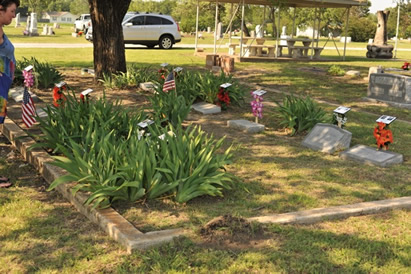 The design of the cemetery was relatively simple. A main street ran east to west along the north side of the cemetery, entering from what was then Front Street, which ran from northeast to southwest. On the main street, there was a pavilion and a hitching area for horse-drawn carriages. The cemetery was divided into two sections by a central road that ran north and south. Each section was divided into four large blocks. Each block was divided into numbered lots with twelve burial spaces on each. Between each lot was an alley for horse-drawn equipment to access the area.

During this period, the Independent Order of Odd Fellows (IOOF) became a prominent civic organization in Princeton. Among the various projects that IOOF lodges oversaw was the organization and maintenance of local cemeteries. On December 12, 1912, Princeton Lodge No. 209 of the IOOF purchased the two tracts of land to the north and east of the existing cemetery for $1 from Alma Wilson.9 A plat was filed with the Collin County Clerk on October 9, 1913, for the new IOOF Cemetery of Princeton, Texas, which included the existing cemetery for maintenance purposes. With the addition of this property, the cemetery covered nearly seven acres and contained 212 burials.

The IOOF Lodge platted and developed Blocks 5-7 in the cemetery. Central Avenue was extended through the new addition for access. The IOOF Lodge continued selling lots and maintaining the cemetery for 14 years. In the mid-1920s the lodge's membership began to decline. On January 11, 1926, the trustees of the lodge sold all their property---the cemetery, the unsold cemetery lots, and the downtown lodge building---to Alma Wilson for $3,100 so that he would release them from their $3,000 loan to build the lodge hall.10 The cemetery was once again placed under the authority of the Trustees of the Princeton Cemetery Association. Two years later Wilson died, and the ownership of the unsold cemetery property passed to his heirs, who continued to sell lots in the former IOOF blocks for another 20 years. At the end of 1928, the number of burials in cemetery totaled 381. It continued to be known as the IOOF Cemetery until 1986 when the cemetery sign "IOOF Cemetery" was replaced with "Princeton Cemetery Est. 1895."

At a meeting on September 26, 1947, the Princeton Cemetery Association reorganized and elected officers.11 Block 8 was created on January 10, 1948, on the former school land that Alma Wilson had purchased from the school district in 1910. On May 26, 1948, the heirs of Alma Wilson and his wife Nancy E. Wilson donated the remaining unsold cemetery lots, 48 in all, to the cemetery association as a memorial gift to honor their parents.

Nearly 60 years later, on June 22, 2006, the cemetery association bought four tracts of land totaling 3.929 acres for $10 from the Farmers Cooperative Gin Association of Princeton, which had closed in 1993.12 After this purchase, the cemetery covered 10.47 acres and contained 1,391 burials. During the demolition of the old gin building, the foundation for the long-forgotten Collin County Cottonseed Oil Mill was discovered, adding one more piece of area history to the cemetery.

Princeton pioneers buried in the cemetery include Alma Wilson (1856-1928) and his son John K. Wilson (1878-1964), who was the first railroad depot agent, the town's undertaker, and the owner of the drug store. Two other noteworthy residents buried in the cemetery are W.A. Harrelson (1845-1932), an original trustee of the cemetery and the town's first resident and postmaster; and his son Althie Harrelson (1891-1963), the first child born in Princeton. Another burial of note is that of Dr. T.G. Boorman (1864-1917), the town's first doctor and an early school board president, who also brought the Bell Telephone System to the town.14

The general landscape of the Princeton Cemetery is traditional with graves oriented east to west. The oldest section of the cemetery is near the center, just south of the pavilion. Although all the lots contain 12 spaces, their dimensions vary. The oldest lots, which are in Blocks 1-5, are 20' x 30'; the lots in Blocks 6-8, which the IOOF laid out, are 25' x 25'. In Block 9, on the old gin property, individual spaces are being sold today. Markers throughout the cemetery are primarily marble, granite, or concrete, although a few are metal or wood. Tombstone detailing on some burials signifies membership in two fraternal organizations: Modern Woodmen of the World and the Masons. The cemetery also contains benches, statuary, and urns.

At the most prominent entry is a large arched sign with the words "Princeton Cemetery Est. 1895." Near the new pavilion, which was erected in 1984, is a Modern Woodman of the World monument that was rescued from a brushy area along the western fence line. Although its original location is unknown, it may have been a headstone. Cultural plants include crepe myrtles, iris, roses, and pecan trees, the largest of which is believed to have been planted over 100 years ago. The northern border of the cemetery remains unfenced. There is a chain link fence on the western border of the cemetery and ornamental fencing on the remaining perimeter.

The Princeton Cemetery Association became a non-profit organization on June 25, 1967. The association operates with an eight-member Board of Trustees elected by the membership. Funding is derived from annual dues of the association members, gifts, donations, and the interest earned on a permanent endowment fund. The cemetery currently consists of 10.47 acres with lots or individual spaces available for purchase by any interested party. At the end of 2018, there were 1,567 graves in the cemetery. In the early years, lot owners took care of the cemetery. Today it is maintained by subcontractors hired by the association. Families continue the tradition of decorating graves on Memorial Day weekend.

The Princeton Cemetery has been an important part of the history of central eastern Collin County since 1895. It is the largest cemetery in this region of the county and serves the rural area to the north and south where the only other cemeteries are primarily small family ones. There is no evidence to suggest that there has ever been another cemetery in Princeton. The tracks of the East Line and Red River Railroad, which was once a part of the historic Katy system, are no longer visible but were originally the cemetery's eastern boundary. Within its borders today are three sites that played important roles in Princeton's history: the site of the first school building in the town, the site of one of Princeton's three former gins, and the site of the long-forgotten Collin County Cottonseed Mill. The graves throughout the cemetery provide a record of area pioneers, business and community leaders, and military veterans. As Princeton has grown throughout the years so, too, has the Princeton Cemetery. The cemetery has been recognized by the Texas Historical Commission as an Historic Texas Cemetery. An Official Texas Historical Marker, prominently placed at the location of the historic hitching area, will provide an important historical interpretation of the early days of Princeton and its development so that its history is not forgotten during this period of rapid growth and great change.

Note: Some of the references above require a subscription to access.

From Hwy 380 in Princeton, go north on Yorkshire Dr. approximately one quarter mile from Hwy 380 on the left.

Princeton Cemetery Association is a non-profit organization chartered in 1967. If anyone would like to help in the upkeep and preservation of the cemetery, donations may be sent to P.O. Box 684, Princeton, Texas 75407.